Led by Prof. QIAO Zhenhua fromHefei National Laboratory for Physical Science at the Microscale of University of Science and Technology of China (USTC), and international collaborators, the research groups found a new system of interaction-induced orbital insulators. The result was published on Physical Review Letters.

Since the symmetry breaking and topology induced by the interaction provide the basis for the classification of condensed substance, an increasing number of researches have been conducted to deepened the understanding.

The kagome, a combination of a linear dispersion relationship similar to graphene and a quadratic tangent energy band and flat band, is regarded as an ideal platform for studying the relationship. However, in terms of a half-filled metal with a flat band with spin, the interaction, magnetism, and the relationship with the topology deserves further investigation.

The group studied the quantum phase of the kagome lattice in the flat band half-filled using the density matrix renormalization group (DMRG) method and the calculation of the mean field topological energy band, which pointed out that the system has an orbital insulator phase.

It found that, under the condition of limited V, the size of J plays a vital role in the phase diagram of the system. 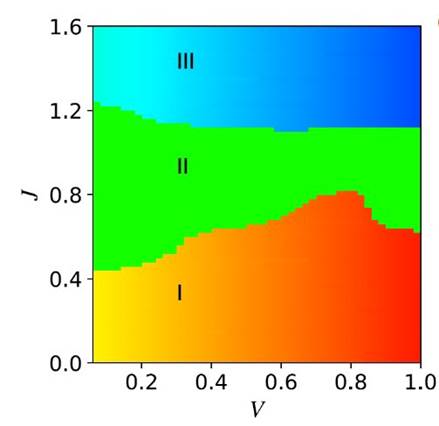 The Chern number of this system only depends on the orbital magnetization of the system, so it can be positioned as an orbital Chern insulator. Rather than being induced by magnetism and spin-orbit coupling, the Chern insulator in this study is induced by the electron-electron interaction.

This study not only showed the existence of another orbital insulator system other than the corner multilayer graphene, but also provided a theoretical basis for distinguishing the different physical mechanisms of the abnormal Hall Effect in the kagome system.