Chinese scientists have achieved the world's first quantum key distribution over 1,120 kilometers without relying on any intermediate security relays, according to a study published in the journal Nature on Monday.

Experts said this represents a major milestone in building a practical global-scale, ultra-secure quantum internet, but the actual technology might still be years away.

Quantum key distribution, known as QKD, is a technique used to achieve secure communication that uses cryptographic protocols based on the laws of quantum mechanics. Today's QKD is mostly conducted through optical fibers on the ground, with few exceptions using quantum satellites.

QKD is theoretically highly secured. But in reality, imperfections in equipment such as photon sources and detectors may lead to security risks, said Pan Jianwei, noted quantum physicist and the lead scientist behind the study.

Moreover, QKD via optical fibers are susceptible to interference and cannot be sent over ultralong distance without relying on intermediate repeaters to boost the signals, he said.

To tackle these issues, Pan and his team tested a new QKD protocol method that uses satellites instead of ground-based relays. 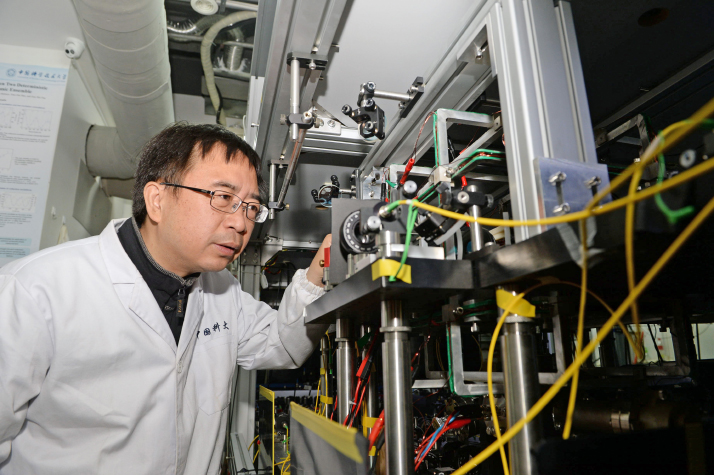 Quantum scientist Pan Jianwei works in the quantum lab of the Univerisity of Science and Technology of China on April 20, 2017. [Photo/Xinhua]

They achieved this by using China's quantum science satellite Micius to send a secret key at the rate of 0.12 bits per second between the ground stations at Delingha and Urumqi, separated by around 1,120 kilometers.

Peer-reviewed comments called the study a groundbreaking experiment, and a significant step toward establishing a global network for QKD, and more generally, a quantum internet for quantum communication.

Gilles Brassard, one of the founders of quantum cryptography, said if the technology for secured, long distance quantum communication finally arrives, this would achieve the Holy Grail that all cryptographers have been dreaming of for thousands of years.

Wang Jianyu, a researcher from the Shanghai Institute of Technological Physics of the Chinese Academy of Sciences, said now that the study has proved that the new technique is technically feasible, the next step should be increasing its communication capacity to make it useful.

It is still too soon to say when the technology will reach the mass market, he said. But in the next three to five years, we might see another leap in this method's efficiency, and that might be enough to support a nation's financial and security communication needs.