Conventional von Neumann computing system has grown outdated with the rapid development of neuro-inspired computing. Memristor-based synaptic devices， which emulate biological synapses, are believed to be promising in realizing efficient neuro-inspired computing. However, previously developed memristors suffered from either high energy consumption or unstableness. Ferroelectric tunnel junction (FTJ) is a new candidate for memristor construction thanks to its stable data storage feature, but it fails to meet the desirable requirements in terms of endurance, energy consumption, linearity and so on.

In a recent work published in Nature Communications, a team led by Prof. LI Xiaoguang and Prof. YIN Yuewei from the University of Science and Technology of China (USTC) of the Chinese Academy of Sciences, developed a novel FTJ synapse based on Ag/PbZr0.52Ti0.48O3 (PZT, (111)-oriented)/Nb:SrTiO3.

The team comprehensively studied the properties of the newly developed FTJ synapse. Under low voltage and operation speed close to that of Dynamic Random Access Memory (DRAM), The FTJ sample displayed 256 conductance states with satisfactory linearity and stability. The ON/OFF ratio was as high as 200, and an endurance up to 109 was also achieved. Even when voltage pulse close to CPU speed was applied, the sample still displayed 150 conductance states and low cycle-to-cycle variation.

In order to study the performance of the FTJ synapse under real circumstances, the team conducted convolutional neural network simulations based on the test result of the FTJ sample. The target of the simulation was to recognize fashion product images in F-MNIST dataset, and a high recognition of 94.7% based on 256 states was achieved. The performance was comparable to that achieved by floating-point-based software.

Noisy images, which are common nowadays, have brought great difficulty to image recognition. Thus, the team then conducted simulation on noisy images with slat & pepper noise or Gaussian noise and the recognition accuracy remained high, demonstrating the reliability of the newly developed memristor based on FTJ synapse.

These results proved that (111)-oriented FTJs did hold promise for neuro-inspired computing. 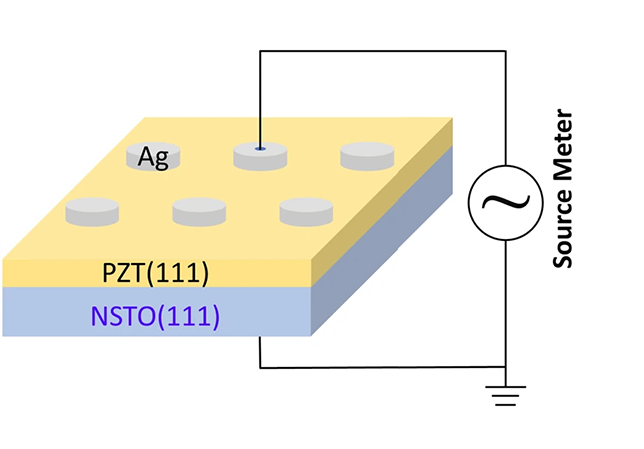