Observation of Rebounding of Star Formation in Active Galaxies Development

The research team led by Prof. HE Zhicheng from School of Astronomy and Space Sciences of University of Science and Technology of China (USTC) of the Chinese Academy of Sciences, together with researchers from Guangxi University of Nationalities, Peking University, and Nanjing University, observed for the first time the rebound of star formation in different phases of the quasar host galaxy. This study was published in Nature Astronomy. 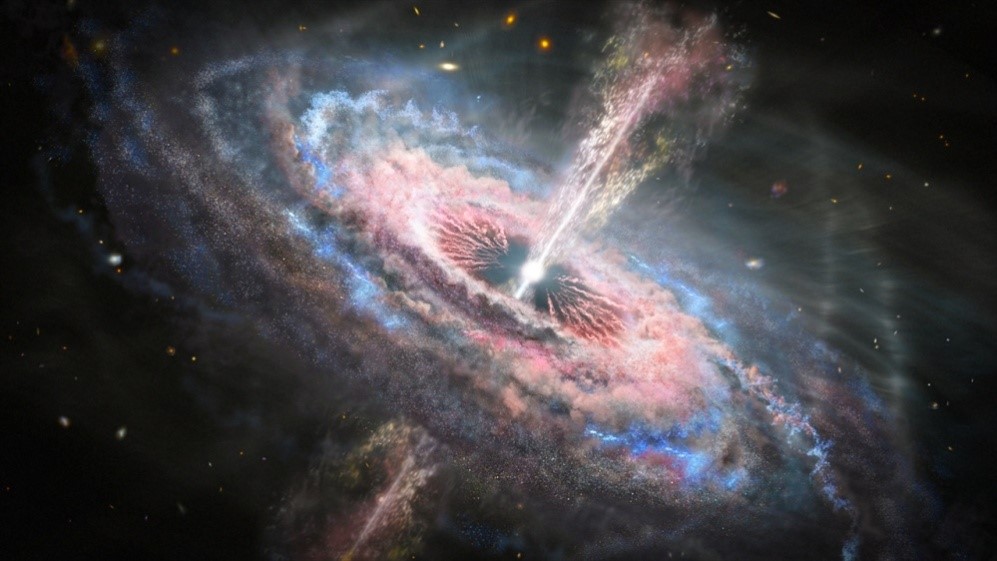 Galaxy is to the universe what cells are to the human body. The formation and evolution of galaxies are key points in understanding the history of the universe and restricting the parameters of cosmology. Theoretical predictions of galactic mass based on cold dark matter (CDM) exceed observation results on both the low-mass and the high-mass end. Numerical simulations show that feedback by supernovas is needed at the low-mass end while feedback by an active galactic nucleus (AGN) powered by a super massive black hole is needed at the high-mass end in to fix the difference between observation and theory.Gas outflow powered by a super massive black hole in an AGN brings mass, angular momentum, and energy from the nucleus to the host galaxy. It is one of the main forms of feedback of AGNs. However, whether this feedback is effective, and whether it is positive or negative remains a focus of controversy in Astronomy.Based on the spectral feature of AGN outflow, active galaxies can be divided into three types with different broad absorption lines (BALs): low-ionization BAL (LoBAL), high-ionization BAL (HiBAL), and non-BAL. They represent the different stages of galaxy formation.In this study, researchers used the flux ratio of bivalent oxygen emission lines to pentavalent Neon emission lines as a proximate indicator for formation rate. Based on the latest catalogue from the Sloan Digital Sky Survey, they assembled a set of samples for the three types. They concluded that there exists a decline in star formation from LoBAL to HiBAL and a rebound of that process from HiBAL to non-BAL, and constructed an evolutionary model to explain the results above.In the early stages of an active galaxy, the AGN is surrounded by an accretion disc of dust, and the black hole in the nucleus has already driven the disc to create a strong outflow. This stage displays a LoBAL spectrum. There exists an abundance of materials for star formation, and the outflow of the AGN is restricted to a small range in the nucleus, not affecting star formation. The result is intense star formation. From the ratio of the samples, the researchers deduced that this stage lasts for less than one million years.As time goes by, the size of the outflow increases, going beyond the dust and reaching a galactic scale. There is only HiBAL at this stage, and the large outflow has an obvious suppression effect on star formation. This stage lasts for over ten million years. Notably, a typical O-type massive star has a lifespan of one million years, so the declining star formation rate is self-consistent.When the dust and gas content in the galaxy decreases, the outflow gradually weakens, and the suppression effect caused by the outflow declines accordingly, resulting in the rebound of star formation rate.The observation of the research indicated that the outflow caused by AGNs has a global negative feedback on galaxy evolution. This provides an explanation for the rebounding of star formation rate and the difference between prediction and observation.