Quantum repeaters that can store multiplexed signals; provide heralded signals of entanglement; and operate at telecommunications wavelengths have been developed by two independent research teams. Their work could prove to be an important step towards the creation of a scalable quantum internet.

The backbone of such a quantum network would be quantum-mechanically entangled links between different network points, called nodes. However, creating entangled links over long distances at high data rates remains a challenge. A big problem is that quantum information becomes degraded as it is transmitted, and the rules of quantum mechanics do not allow signals to be amplified by conventional repeater nodes. The solution could be quantum repeaters, which can amplify quantum signals while still obeying quantum physics.

Now, two independent research groups — one at the Institute of Photonic Sciences (ICFO) in Spain and the other at the University of Science and Technology of China (USTC) – have shown how quantum memories (QM) offer a path towards practical quantum repeaters.

Both teams’ approaches use photon-pair sources, where one photon is stored in the QM and the other is used as a signal to herald (or confirm) the entanglement. Multiplexing, by means of storing several signals at once using different photon wavelengths, is performed via atomic frequency comb protocols. This means that the systems do not have to wait for a successful heralding event before generating the next entangled pair. Equally important is that the heralding photons are at telecoms wavelengths, making the systems compatible with existing telecoms networks and allowing entanglement to be created over long distances using optical fibres.

The ICFO system uses a QM that stores photons in millions of atoms all randomly placed inside a rare-earth doped crystal. The team uses a set of photons at different wavelengths. One at 606 nm for storage, one at 1436 nm (telecom wavelength) for signalling that entanglement is achieved. The QM can store the signals for up to 25 µs, before releasing the signals. Entanglement is achieved between two QMs by storing a single photon in a superposition over the two QMs placed in different labs 10 m apart.

Meanwhile in China, the USTC team used QMs based on rare-earth-ion-doped crystals. The team built an elementary link with an intermediate station and two nodes at the ends. Each node contains a QM where one entangled photon of each photon pair was stored for 56 ns before being released for analysis, while the other was transmitted to the middle station for joint Bell-state measurement (BSM). A successful entanglement swapping operation was heralded by the successful BSM and entanglement was established in between two QMs placed 3.5 m apart.

Commenting on its work, ICFO group leader Hugues de Riedmatten says, “Several technical challenges had to be overcome, like the frequency stabilization of the set-up and controlling the length of the optical fibres to within a few hundreds of nanometres. We are now working on improving the performances of the sources and quantum memories to get longer storage times and on-demand read-out of the stored qubits. We progress towards a multi-node network and longer distances with quantum repeaters and to perform entanglement swapping between links.”

Zhou Zongquan at USTC says, “Our work shows a complete demonstration of an elementary link of a quantum repeater based on absorptive memories.” On future developments he adds: “We will update the light source to a deterministic entanglement source to greatly enhance the entanglement distribution rate. Overall the  performances of the memory should be greatly enhanced, including efficiency, lifetime and multimode capacity and be optimized according to the applications of a practical quantum repeater.”

Ronald Hanson at Delft University of Technology in the Netherlands is positive about both teams’ achievements: “These results can be considered an important achievement in the specific context of building quantum repeaters, towards improved transmission of quantum communication over long distances. For solid-state ensemble-based memories, these push the state of the art significantly. Most important is the combination of operation at telecom wavelengths, heralding signals of entanglement and multiplexing ability. Improved performance of the memories in the future will enable full heralding as required for scaling towards useful quantum repeater systems.”

Rodney Van Meter at Keio University in Japan also praises the work: “Both teams (albeit different in the details) have each achieved something remarkable: creating two entangled photon pairs, storing two photons in separate memories some distance apart while bringing the remaining two together to conduct a joint measurement. Afterwards, the two stored photons are released where their successful entanglement is measured.” He adds that it is still early stage and significant improvements need to be made: “The trial rates and success probabilities still need to come up, but every day, it seems, brings us a new result that moves us a step closer to a practical quantum internet.”

Papers describing the USTC and ICFO research are published in Nature. 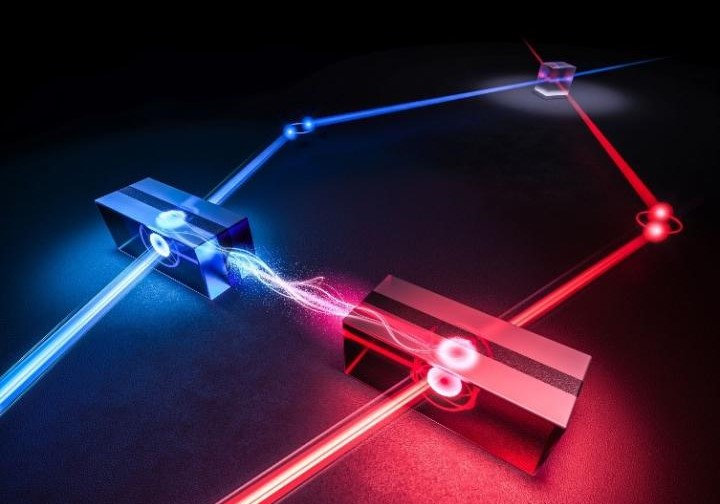 Essential component: Artist’s impression of an elementary link of the USTC quantum repeater based on two absorptive quantum memories, which are the sandwich-like structures. (Courtesy: Wang Guoyan and Ma Yanbing)