During the cooling down of the universe after the Big Bang, protons and electrons combined to form neutral hydrogens, which would absorb ultraviolet photons, and thus the universe was in the so-called Cosmic Dark Ages.

The universe entered the epoch of reionization (EoR) when First Generation Stars and Galaxies began to form, as the hard ultraviolet photons they emitted ionized the hydrogens, or the intergalactic medium of the galaxies, generated ionized bubbles. These bubbles grew and merged into giant ones, making the universe transparent again. Observation of the galaxies in EoR is a fascinating challenge for astronomists.

The project of Lyman Alpha Galaxies in the Epoch of Reionization (LAGER) initiated by Department of Astronomy of University of Science and Technology of China of CAS and co-participated by researchers from China, the United States, and Chile, found the protocluster LAGER-z7OD1, known to be the most distant with spectroscopic confirmations, at the redshift of 6.93. This result was published on Nature Astronomy.

The galaxies in the EoR are believed to emit strong Lyman-α (Lyα) lines, which can be effectively selected with narrowband imaging surveys. Redshifts of protoclusters up to 6.6 have been identified. The larger of the value indicating the farther away of the Celestial body from earth.

The researcher team aimed to build a statistical sample of Lyα-emitting galaxies (LAEs) at a redshift of ~7. Utilizing the Dark Energy Camera on the Cerro Tololo Inter-American Observatory (CTIO) Blanco 4m Telescope and a customized narrowband filter, they revealed a high-number-density region, 6 times of the average, and with 21 narrowband selected Lyα galaxies.

The region, LAGER-z7OD1, is at the time when the Universe was only 770 million years old (about 6% of the total age of the universe). This protocluster would merge into one massive cluster with a present-day mass of 3.7×1015 solar masses. 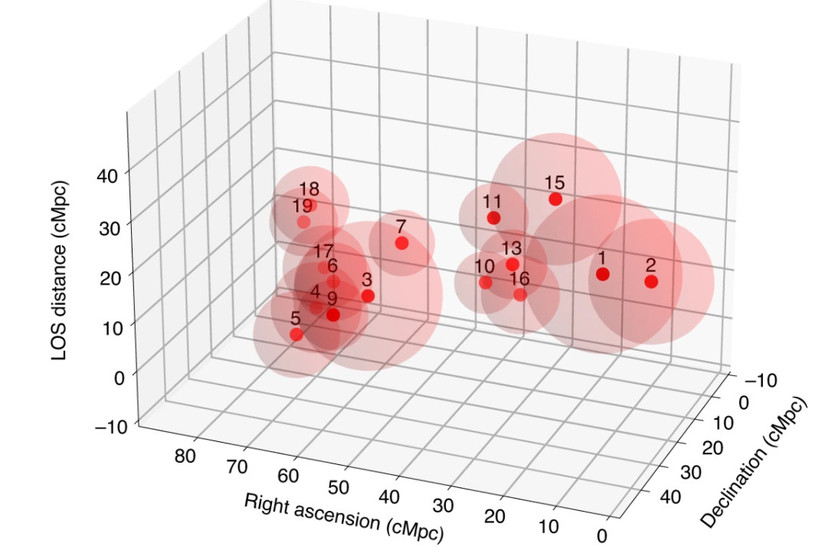 This work breaks a record of redshift. LAGER-z7OD1 provides a unique natural laboratory to investigate the reionization process. It could give out evidence of transformation from dark to transparent and the formation stages of galaxies.