PAN Jianwei and colleagues PENG Chengzhi and ZHANG Qiang, from University of science and technology of China, cooperated with WANG Xiangbin from Tsinghua University and YOU Lixing from Shanghai Institute of Microsystems of Chinese Academy of Sciences realized the measurement device independent quantum key distribution (MDI-QKD) experiment based on long-distance free space channel for the first time in the world, which published online in Physics Review Letter.

Due to the fact that the atmospheric turbulence in free space channel destroys the spatial mode, it is necessary to use single-mode optical fiber for spatial filtering before interferometry. The low coupling efficiency and intensity fluctuation are the two major difficulties in this experiment.

The research group first developed an adaptive optics system with strong turbulence resistance based on the stochastic gradient descent algorithm, which improved the total channel efficiency of dual links by about 4~10 times.

To tackle the synchronization problem, the team adopted a super stable crystal oscillator as the independent clock source at three experimental points and measuring the real-time feedback of the pulse arrival time, which achieves am accuracy of 32 ps.

The hydrogen cyanide molecular absorption cell was deployed at the both coding ends to calibrate the optical frequency and assured the frequency difference of the interference light was less than 10 MHz, achieving frequency locking.

The above series of breakthroughs helped the experimental team to realize the first free space MDI-QKD experiment in Shanghai urban atmospheric channel. The length of the two channels is 7.7 km and 11.5 km respectively and the distance between two communication ends is 19.2 km.

This major progress has received great interests from both home and abroad for opening the possibility of realizing more complex quantum information processing tasks based on long-distance quantum interference in free space channel. It is one step closer to a global internet invulnerable to hackers may be a ways off, according to the website physics of American Physical Society. 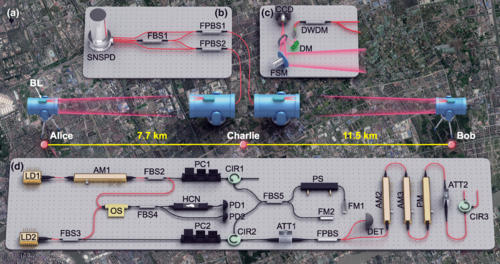 Experiment setup. It shows the top view of the experimental layout at the Pudong area, Shanghai. (Image by CAO Yuan et al.)

MDI-QKD protocol is considered as one of the best candidate protocols in all kinds of quantum key distribution protocols because it eliminates all the security vulnerabilities in the detection end by using two-photon interference technology and needs no any security assumptions on the quantum devices in the measurement end. Since it was first proposed in 2012, MDI-QKD Protocol has developed rapidly in the field of fiber channel. A series of breakthroughs in the direction of longer distance, higher key rate and network verification. However, due to the inherent loss of optical fiber, quantum signal cannot be amplified like classical communication. According to the data calculation, it will take millions of years to establish a bit key through 1200 kilometers of optical fiber, even if there is a single photon source with an emissivity of 10 billion per second and a perfect detector.

Free space channel is an information channel in which the optical signal loss is very small due to the almost vacuum in outer space, so the quantum communication distance can be greatly extended with the assistance of satellite. In recent years, with the success of Mozi quantum science experimental satellite, quantum communication based on satellite platform and ground optical fiber network has become the most feasible means to build a global quantum communication network. Although MDI-QKD has been successfully implemented in optical fiber, how to realize quantum interference in such an unstable channel has become a great challenge due to the existence of atmospheric turbulence, which also makes MDI-QKD has not been implemented in free space channel.