The virtual International Quantum 2020 conference, from October 19 to 22, was organized by IOP publishing in partnership with University of Science and Technology of China (USTC) and the Chinese Physical Society (CPS). Prof. PAN Jianwei from USTC was the honorary president and Prof. LU Chaoyang from USTC was the president of Organizing Committee. 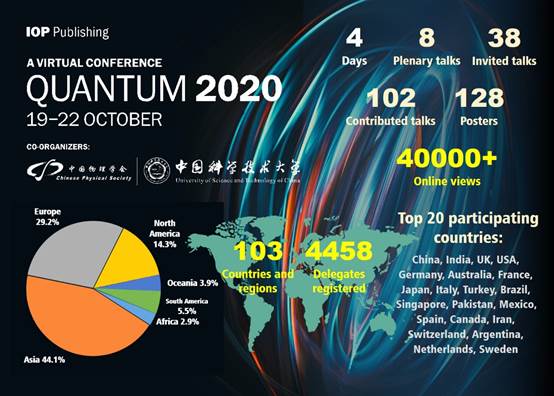 Poster of the conference

Under the effect of COVID-19, the conference was chosen to be online, which gave everyone access to this conference. During this 4-day-long period, this conference had attracted attendants from 103 countries worldwide, with 4,458 registered users, and the number of viewers from different platforms added up to 40,000.

Attendees could hear from leading experts in quantum as they came together to discuss the latest developments and the future direction of the field. Forty-six talks and panel sessions were streamed from world-renowned scientists, including Sergio Boixo from Google, Michelle Simmons from the University of New South Wales, Jelena Vuckovic from Stanford University and PENG Chengzhi from USTC. 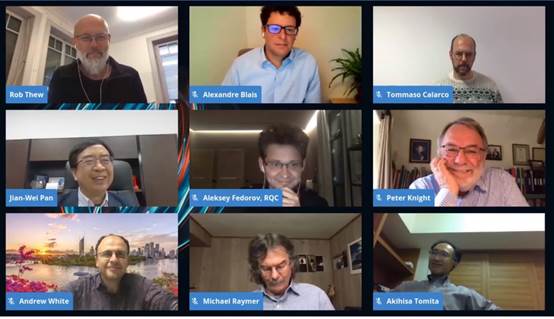 Screenshot of a heated discussion

In addition, the conference focused on the layout of national quantum programs worldwide and quantum-related industry. After reaching the agreement that developing quantum information technology calls for joint efforts, they discussed on how to develop and proceed quantum-related technology steadily.

All of the representatives from different countries hold the same belief that international cooperation is indeed necessary for further development of quantum technology. Representatives from leading companies of quantum information technology, like IBM, Microsoft and IonQ, also introduced their developing procedure and current situation.

Another highlight was that the conference culminated with an international awards ceremony, where the winners of the Quantum Technology ‘young scientist’ and ‘emerging researcher’ awards were announced.

The awards, which recognize and support scientific excellence and development of quantum technology researchers at the early stages of their career, were awarded to Doc. Nicole Halpern from Harvard University and Prof. Hannes Bernien from University of Chicago.

The virtual International Quantum 2020 conference provides a model for global conference under the effect of COVID-19, which ensured the safety of attendants while cutting down on organization expanses. The open online pattern also gives researchers the opportunity to exchange knowledge and collaborate on emerging areas of interest.