The European Nuclear Center (CERN) reported a significant evidence proving the Higgs particle decays to the final state of the dimuon on the Large Hadron Collider (LHC). On the LHC, the detection significance of the signal obtained by the CMS and ATLAS experiments was 3σ and 2σ respectively; when combined, the evidences for the detected signal is unequivocal (>3σ). It is the first time directly detecting the coupling of Higgs boson and the second-generation fermion. The ATLAS experimental group of University of Science and Technology of China (USTC) made important contributions to this work.

The Higgs boson plays a pivotal role in the Standard Model theory of particle physics that describes the microscopic world. Elementary particles interact with the Higgs field to gain mass. The Higgs boson is closely bound up with the origin of the material world and the early evolution of the universe, so it has been one of the cores of particle physics theoretical and experimental research. The discovery of the Higgs particle marks the success and completeness of the Standard Model. However, there are also major issues unexplained by the Standard Model in nature, such as the existence of dark matter, the mass of neutrino, and the asymmetry of the universe's positive and negative matter. Therefore, one of the important projects in particle physics is to unfold around the Higgs particle, aiming to gradually reveal its property and connection with the unknown world.

The ATLAS results in this report were jointly completed by several organizations, including USTC, Shandong University (SDU), and Tsinghua University (THU). The ATLAS gave out the following two figures based on the 13 TeV proton-proton collision data collected by LHC. The analysis methods used in the latest results mostly relied on a preliminary analysis work done by USTC and SDU jointly.

Dimuon invariant mass spectrum in all the analysis categories observed in data. 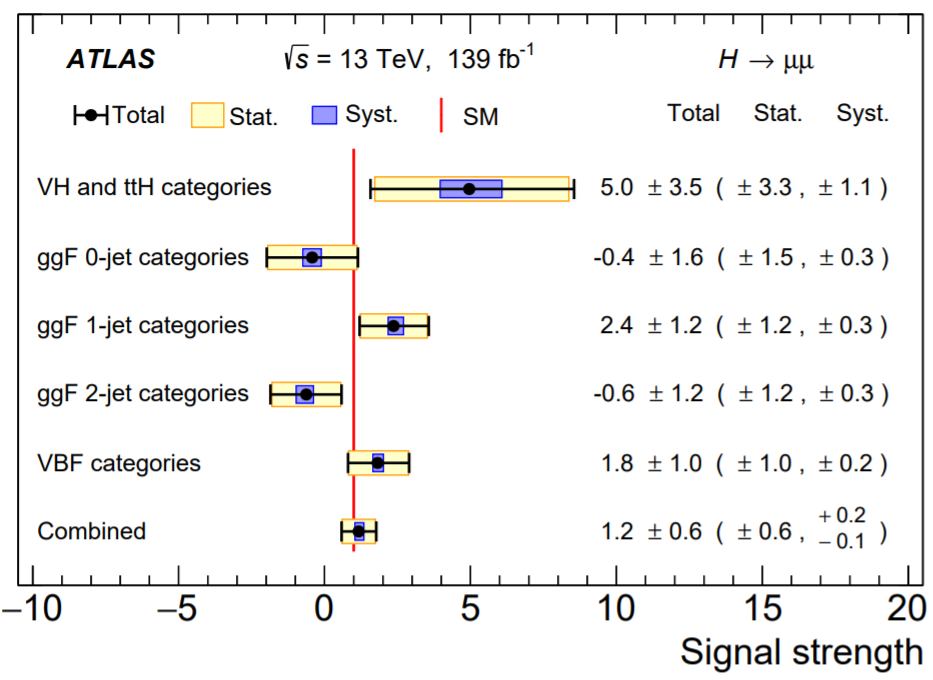 The best-fit values of the signal strength parameters for the five major groups of categories together with the combined value.

This experiment and the ATLAS group have been supported by the National Natural Science Foundation of China, the Ministry of Science and Technology, the Chinese Academy of Sciences and University of Science and Technology of China since 2015. Mr. CHEN Ye and Dr. DIMITRII Krasnopevtsev from USTC did the multiple analysis containing software framework, reconstruction optimization of the muon, signal system error, and research on the new VH analysis channel. Prof. ZHU Yingchun was the instructor of Mr. CHEN Ye; Prof. WU Yusheng was the leader of the project.